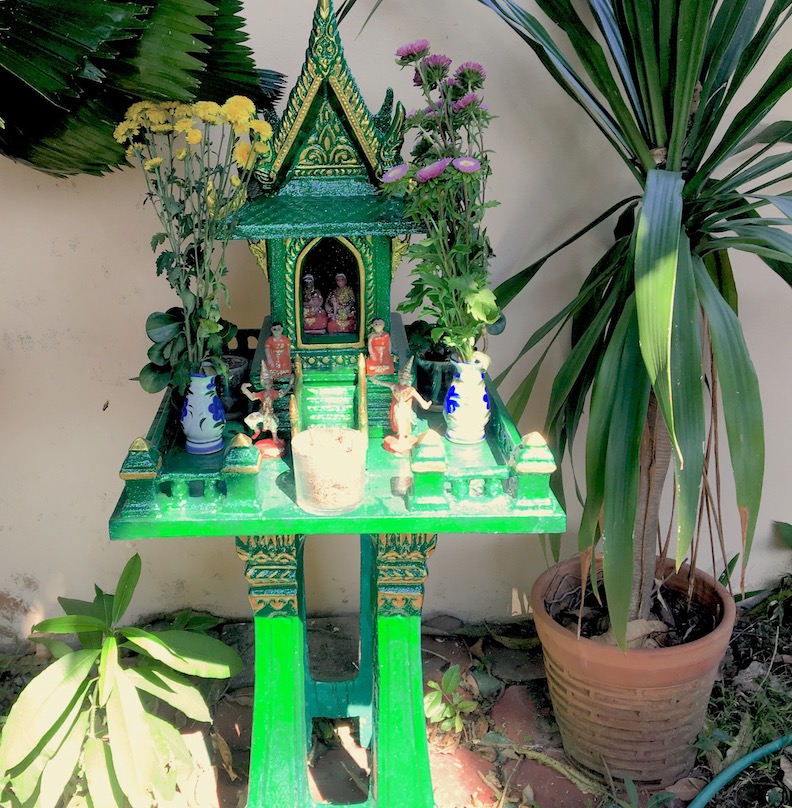 [I’m two months behind on writing my posts. I’ll try to catch up.]

After moving to our new house in January, a welter of business necessities occupied me for most of two months. Immigration paperwork, opening a bank account, getting internet service—all have bureaucratic requirements that interlock like a Chinese puzzle, sending me back and forth to various offices. All this travel (or for that matter, even grocery shopping) was too exhausting on a motorbike, so I bought a car—another few rounds of paperwork. The capstone of all this has finally been put in place with a visa that can be renewed perpetually, and a Thai driver’s license.

But before the mundane tasks, the highest priority was to make our home a sacred refuge. The concept is not new to me, of course; I’ve been putting sacred altars in my home, and doing house blessings, for many years. But Thailand has its own way of doing this. Every home or business must have a “spirit house” outside.

Here is an article with lots of background on this practice (although, after discussing some of its points with Esso, I find there are differences of opinion, as well as differences in regional practice) 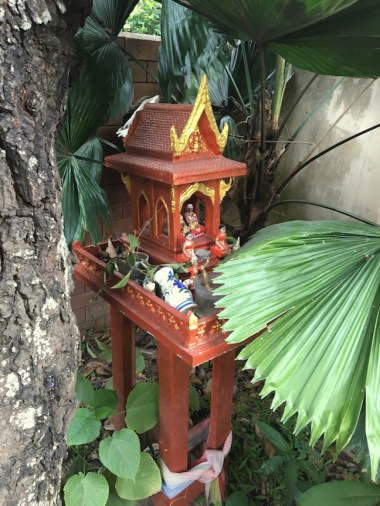 There is already a san phra phum in the corner under the mango tree in front of the house, when we are moving in. But I see that it is in poor condition (perhaps disregarded by a previous tenant) and immediately suggested that, instead of trying to rehabilitate it, we start from scratch. Esso enthusiastically agrees. We go shopping for the new one…

San phra phum shops are not hard to find; the goods are made cheaply of a concrete-like composite, and painted in many colors. (Traditional, hand-made wooden spirit houses, however, are scarce). Most are small, like the one we found, or you can go for the monumental. We settle on one a bit larger than the previous one—Esso wants a larger space on the platform for ceremonial offerings, and I’m just accustomed to thinking larger scale. 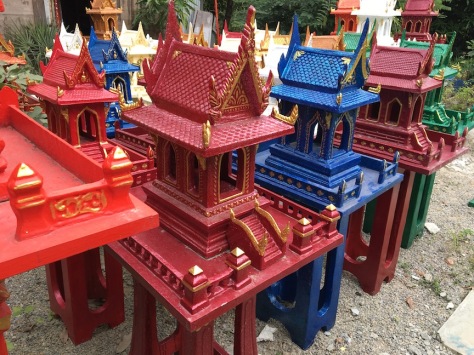 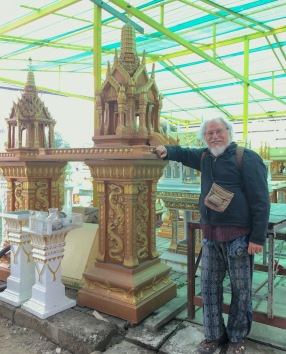 Once the house is installed, we come to the question of its occupants. I would have left it open for invisible spirits, but the old one has a weird collection of ceramic figurines: people and animals. Esso insists that we need the people, to represent the harmonious family we intend to be. Even children? Well, okay, if you insist.

But I draw the line at the animals. Cow, pig, chicken—these are good for a farm, but we don’t have a farm. And, they are domesticated animals—slaves, in effect. Not the sort of spirits I want to invite. I say, let the animal spirits come to us freely, we do not compel them. And we set the old animal figurines aside. (The photo at the top shows the new house with the human figures, including two dancers. I support dancers, human or spirit!)

In the next few days, after blessing the new house, many birds come to the yard. A cat shows up, and sits watching the san phra phum for a time. And then, Esso sees a snake crossing our little garden—a green viper, she fears, but probably a harmless Golden Tree Snake—and climbing the mango tree. So it’s settled. We go out and find figurines of bird, cat, snake, and put them in our little house. We haven’t seen the cat or the snake since, but the birds have come to nest in our roof-garden, where we welcome them.

One thought on “Spirit House”