Amsterdam, like Venice, is built on canals, but with quite a different history. Venice began as a group of islands, whose natural boundaries have been more or less preserved, and the canals are simply a system of tidal sloughs. (The tide in Venice is very slight, so there is no need to control it). Amsterdam’s canals are thoroughly engineered; on the map, they display perfect symmetry, even from the 17th century.

Over the centuries, maintaining the city above water between the flooding river and the surging North Sea has  made the Dutch the world’s best hydraulic engineers. Indeed, I suspect that the endless effort to balance and control these natural forces has defined the national character. I never get the feeling here that any Nederlander has too much slack, or too little.

Taking advantage of this great engineering, we have an easy train ride into the city, and an easy tram (i.e. streetcar) ride from the front of the railroad station,  to within two blocks of  B&B. Nonetheless, it takes most of the day to get here, and we have only two days left.

The weather has been rainy, but asset that it will be better now, because we need good weather to enjoy the city. Sure enough, the morning comes up clear.

Our first priority is to find a bike shop, because bicycles are the best way to travel through the city. Maggie is anxious because she has not been accustomed to riding bikes in traffic—not to mention that I am also out of practice, and we are both nursing sore knees! Still, we find bikes to rent, and head for the park first, to enjoy bicycling in a low-pressure setting.

In Amsterdam (and other Dutch cities), bikes have their own lanes, clearly separate from trams, cars (usually), and pedestrians, and with their own traffic signals. This takes a little getting used to, but it’s well worth it. Every few blocks, the path will cross a canal. Stop to admire to beautiful scene on the water—or maybe the beautiful bridge. I am exhilarated by the exercise and the sense of freedom, after so many days of being a passive passenger. By the end of the day, I’m feeling healthier than I have the whole trip. 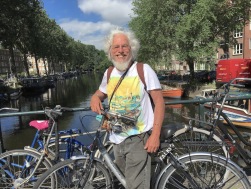 After a little relaxing in the park, we take

to the busy bike lanes along the old canals toward the Centrum. It’s back to the main railroad station, but not for a train; today we will also tour by boat. But first, the problem of parking our bikes. Here, there is a massive parking lot for bikes, maybe an acre or two, totally packed. Luckily, we see someone leaving her space, and contrive a way to cram our two rented bikes into it.

The most obvious reason this city thrives on bicycles and trams, with only a 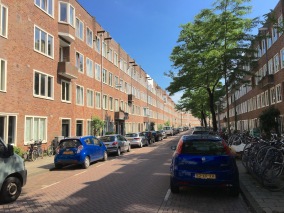 minimum of automobile traffic, is that it’s built densely, with no wasted space. Away from the city center, where many American cities have spread-out tract housing, Amsterdam has rows and rows of apartments. (None too tall, since everything is built on mud). The lovely parks and canals provide plenty of open space.

One thought on “Amsterdam by bike…”